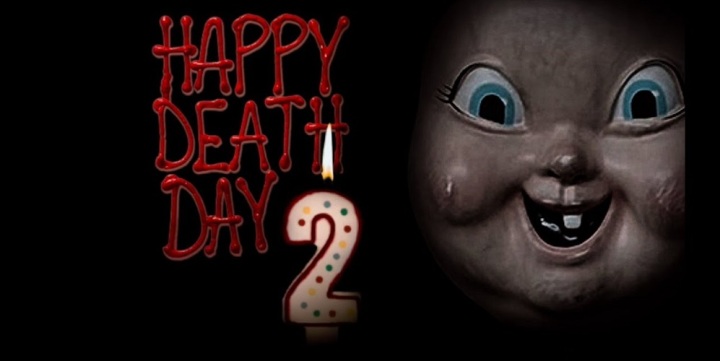 Time-loop murders have never been so funny.
Happy Death Day 2U, as you may have guessed from the title, is a sequel to Christopher Landon’s critically acclaimed horror film Happy Death Day, a movie which combines the endless time-loop anomalies of Groundhog Day with the added element of a relentless serial killer. In the first movie, sassy sorority girl Theresa “Tree” Gelbman, portrayed by Jessica Rothe (La La Land, Mary + Jane) finds herself stuck in a time-loop, reliving Monday the 18th over and over as she is hunted down by a serial killer in a baby-face mask. But despite unmasking and defeating her killer, and finally making it to Tuesday the 19th, Tree once again finds herself stuck back in the time-loop once in Happy Death Day 2U, albeit with a sly twist or two.
Set immediately after the events of the first film, this sequel builds on the premise of the first movie and takes it to new territory. While the first movie is certainly a more traditional slasher affair, Happy Death Day 2U has more of a sci -i and comedic twist, that successfully mirrors and expands upon what we’ve already seen. We finally get an answer to how this time-loop is happening, and what may finally stop it, in the form of a science experiment gone wrong by overly-ambitious physics students, Ryan Phan (Phi Vu), Samar Ghosh (Suraj Sharma, Life of Pi) and Dre Morgan (Sarah Yarkin). Also back for the ride is love interest Carter Davis (Israel Broussard, To All The Boys I’ve Loved Before) to help crack the case armed with only his boy-scout determination and heart-melting smile.
While the trailer for this film makes it look like a much more of a classic slasher movie, especially when produced by Blumhouse Productions, who made The Purge, I would instead classify this as a dark comedy. And as someone who usually avoids horror movies and gratuitous gore, I loved this. The characters are all immediately charming, the dialogue is witty and off-the-walls funny, and Rothe’s portrayal is spectacular. You can really see the frustration in every aspect of her performance at waking up to find that once again she’s stuck in this hellish nightmare. There are also just some really excellent visual moments, in the montages between deaths and waking up, that really give this film more of an artsy feel than typical teen slashers like Scream. But ultimately there are still enough jump scares to keep the slasher fans happy, this film continuing to do what it did in the first one and playing with audience expectations, giving you multiple fake-outs before finally revealing the killer.
Fans of the first movie will love this, but this sequel also works well on its own, thanks to the quick but informative recap near the start that sums up the first movie – which was helpful because I personally had not seen the first movie before this one. But I’d definitely recommend you watch Happy Death Day first just to get the most out of the sequel, so you can truly appreciate all the call-backs and mirroring that this film does so well.
Given the title, it shouldn’t be surprising that there’s a lot of death and violence in this movie, even if it’s rather cartoonish at times, but I would definitely issue a trigger warning for suicide due to a particular montage where Tree attempts to end each day on her own terms instead of waiting to be killed. It’s played for comedic affect, especially as she’s cheerily waving to the sky diving instructor as she drops out of a plane in a bikini, but just be aware of this part of the movie.
In summary, Happy Death Day 2U plays with genre expectations and delivers a thoroughly entertaining ride that will have you laughing one minute, covering your eyes in fear the next, and breaking your heart a moment later. It’s a roller coaster I’d be happy to live through, again and again and again.