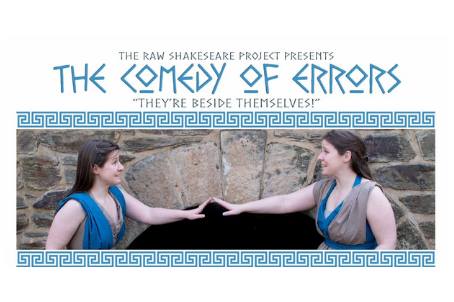 The Raw Shakespeare Project, previously Little Fish, opened their Summer Season on the 11th of January, with a performance of Comedy of Errors at the McLaren Vale Visitor’s centre. If you haven’t seen a show here, it’s certainly something to put on your bucket list. A Shakespeare company often found out of doors, The Raw Shakespeare Project, with director Damien White, has brought a number of the bard’s plays to life over recent years, showcasing the acting of a number of local and talented actors each sharing a passion for Shakespeare.

The McLaren Vale Visitors Centre is one of four venues to host this performance, three of which are located in the iconic wine region forty minutes from Adelaide. Stage-less, The Raw Shakespeare Project makes use of the open grass at the rear of the building, using the beautiful backdrop of local vineyards, hills, and forestry to contrast with the varied and vibrant settings of various Shakespearean works.

Beginning at seven, the show was designed to take place as dusk fell, fairy-lights and “stage” lights prepared for the evening to come. With one twenty-minute interval in the show, audience members were given the opportunity not only to refresh their drinks, but also to marvel at the changing sky behind the centre as the sun set.

Comedy of Errors follow the story of two identical sets of twins whose lives have been spent apart. Antipholus of Syracuse (Jabez Retallick) and Antipholus of Ephesus (Ognjen ‘Oggy’ Trisic) and their servants Dromio of Syracuse (Phoebe Shaw) and Dromio of Ephesus (Isabella Shaw) are interchangeably mistaken after Antipholus of Syracuse and his servant arrives in Ephesus. As the hilarity of mistaken identity ensues, is becomes “clear” to Adriana (Kate van der Horst) that her husband has gone mad. With the help of her sister Luciana (Heather Crawford) and the Duke Solinous (Damien White), Adriana intends to help her husband overcome his madness. But will Amelia (Shannon Gray) have something to say about that?

With the ready dynamic of the Shaw sisters as the Dromio sisters, and the cheerful antics of White as Solinous, Comedy of Errors was in set in motion. The similarities between the Shaw sisters gave the comedy a feeling of authenticity it might have otherwise lacked.

Despite a few extremely minor hiccups, the show was certainly entertaining and engaging. With much of the audience entranced, the Raw Shakespeare Project certainly paid tribute to the bard. I would recommend experiencing the Raw Shakespeare Company if not for their performance, then for the rich value of the experience: watching talented actors convey stories that aren’t just familiar but ingrained into our culture.

Tickets for this limited time only show can be purchased online through their website: https://www.rawshakespeareproject.com.au/box-office

Kayla Gaskell is one of the managing editors of Tulpa Magazine. She has a Creative Arts and Honours degree in Creative Writing from Flinders University. As well as working on Tulpa, Kayla writes for Fest, The Eye Creative, Readplus, and more.