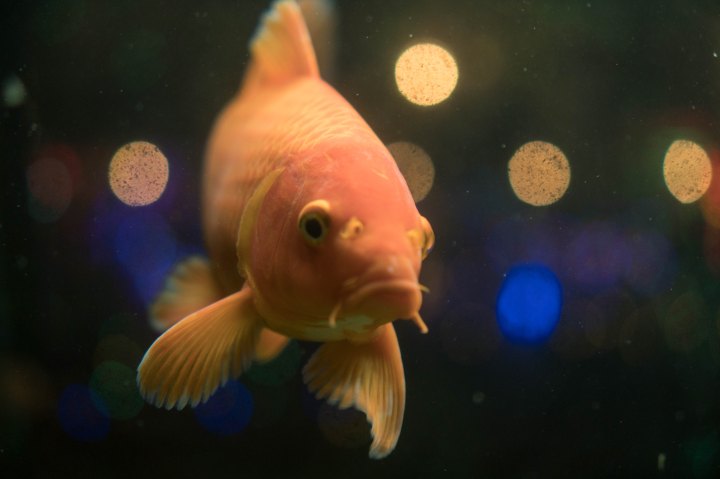 Bob was a goldfish. He lived in a fancy house with all the fancy trimmings – coloured pebbles, a deep-sea diver blowing bubbles and an ocean view. Bob was happy. Until he was not. Staring into the world beyond had Bob thinking about the meaning of life. Enter existential crisis.

He had always admired pelicans – they were imposing yet graceful (well that might be a stretch) and had the freedom to discover new lands and wistfully watch the creatures below.

It was morning, or maybe afternoon (how the hell would Bob know? He’s a goldfish) when an idea arrived. An epiphany. A light-bulb moment. An irrational thought from inhaling too many oxygen filled bubbles. Are bubbles filled with oxygen? Whatever science, who made you the boss of everything?

It was in that moment that Bob hatched a daring plan.

He was quite a fit-fish and it didn’t take long for him to achieve his goal. Plop! Bob had thrust himself out of the tank and was now lying belly-side on the carpet. He flapped about instinctively.

As his last breath was drawn, the flapping stopped.

Bob’s soul rose from his tiny neon body and floated outside above a sandy shore. He could see a sleeping bird, no, a dead bird. Then, Bob had another epiphany. Wiggling his tail and using all of his fit-fish-soul muscles he drove downwards and into the chest of the stiff creature. Opening his eyes, the world seemed sharper and brighter. The smell of salt filled his nostrils and tickled his tongue.

Bob was now a pelican.

He stretched out his wings, pressed his webbed feet into the sand and savoured his breath as he inhaled real air for the very first time.

Bob flew from the beach to the jetty. From the jetty to the river. He discovered new lands and wistfully watched the creatures below. Bob was happy. Until he was not.

You see Bob was now a pelican and what do pelicans eat? He just couldn’t bring himself to dine on his fishy friends and so eventually Bob died of starvation.

And that is why you should never leave your fish bowl.

Or maybe it’s be happy with who you are?? Yeah, let’s go with that.

Emmica Lore is a creative person. She is a writer, poet and avid op-shopper who also makes art from time to time. Emmica is interested in sustainable style, philosophy, politics, art, feminism, whimsy and nature. You can find her on Instagram @emmicalorecreative

‘Bob’s Truth’ has also appeared on Lore’s website https://www.emmicalore.com/ and was previously featured in an exhibition.

Photo by Julieann Ragojo on Unsplash.