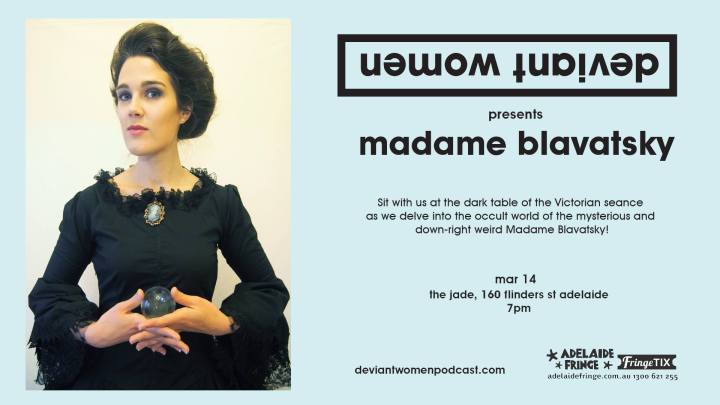 After a triumphant five-star show about the swashbuckling Julie D’Aubigny, Deviant Women returned to the stage with the story of nineteenth century occultist Madame Helena Blavatsky. This time round the pink puffy dresses were replaced with gothic black gowns and the show had an altogether darker feel. This isn’t to say that it was all serious- it wouldn’t be a Deviant Women stage show without laughter, silly hats and flamboyant acting. All the comedic goods were out on display, bringing a whole lot of fun to this tale of spirits and séances.

Using the same artful storytelling characteristic of their regular podcast, along with some spooky shadow poetry and an on-stage séance, hosts Lauren and Alicia brought Helena’s story to life with flair and attention to detail.

Deviant Women always aims to give the audience as much knowledge as entertainment. As academics, Lauren and Alicia always strive to provide rich biographical detail on the women they talk about. Their biographical run-down of Madame Blavatsky’s life was no different.

Since her childhood in Russia, where the auspicious date of her birth connected her deeply with spirits and other otherworldly beings, Helena was destined to lead a life bound with the occult. Helena rebelled against many of the rigidly moralistic ideals of the nineteenth century. She married but denied her husband sex (a big no-no in the Victorian period) and often chose to travel alone.

During her travels she held séances and decried trickery (like the ghosts in bedsheets and stuffed gloves that were mainstays of many parlour séances). Her interest in other religions led her to adopt many aspects of spiritualist practices from around the world, including Buddhist and Hindu traditions. She was the mother of the new-age movement and founder of Theosophy. She was a woman who accomplished a lot during her life (despite smoking to excess, drinking and a penchant for hashish).

The absolute highlight of the night was the on-stage séance. From inviting an audience member to join in the summoning of a ghost (which did yield a stuffed glove which Lauren used to stroke the volunteer’s face while their eyes were closed), to Lauren emerging in a bed sheet and mask to sweep about the crowd offering an ectoplasm covered arm, the séance was filled with the fun and trickery you’d expect from a Victorian era party.

The Jade was the perfect venue for the cosy but slightly spooky feel of the stage, and the dark lighting and sounds of thunder made for the perfect ambience for a story of the occult.

Deviant Women: Madam Blavatsky was a perfect blend of dark and comedic, of the spooky and the playful. It was a night any Victorian lady or gentleman would be proud of.

For more about Deviant Women don’t forget to check out their podcast or catch their interview with Tulpa and Jess M. Miller’s review of their first stage show: Julie D’Aubigny.