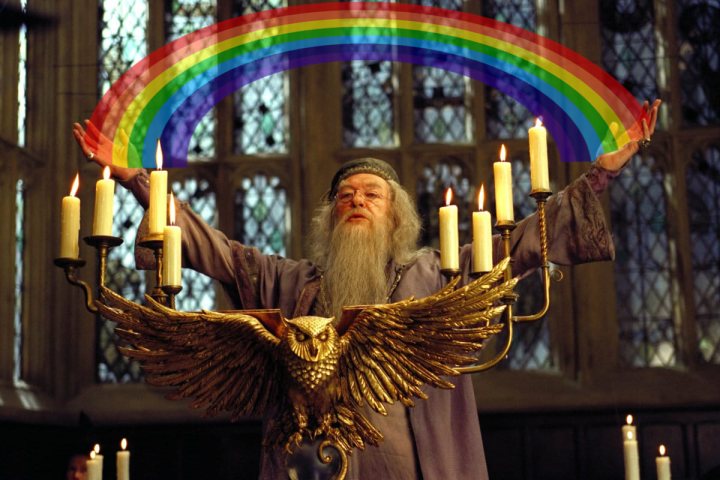 With the recent revelation that Dumbledore, our favourite gay wizard, won’t be all that gay in the next Fantastic Beasts movie, I think it’s fair to say that the tide has finally turned; J. K. Rowling’s table-scrap representation is no longer enough. Readers are no longer satisfied with post publication declarations that an unaddressed, unimportant character might have been Jewish or something. This is not effective or accurate representation.

The thing we should keep in mind, however, is that J. K. Rowling wasn’t brave or unique in codifying Dumbledore’s queerness. She was just tapping into an unconscious trope that has been in children’s fantasy fiction since the very beginning.

Children’s fantasy is filled with ‘others’, like Ged from Earthsea, Morrigan Crow from the Nevermoor series, or the inescapable example Harry Potter. Then there are those who might be completely of the ‘normal’, but find themselves feeling like ‘others’ because they’re in an entirely new world, such as the queer icon Dorothy in Oz, the sons of Adam and daughters of Eve from The Chronicles of Narnia, and the Alice of Alice in Wonderland.

It’s not uncommon for children to feel this way about themselves – approximately 1 in 4 children reported being bullied at school in 2009. This is particularly key for children who may be struggling with sexuality or gender, feeling different for a reason poorly explored in the fiction around them.

Even without bullying, growing up is difficult, and the process of changing from child into adult is a metamorphosis that overwhelms even the best of us. It is here that books become a key in figuring ourselves out through sympathy and empathy, relating our feelings of ‘otherness’ with those on the page.

These ‘others’ find themselves in places and situations that are impossible to the uninitiated. They require guidance and teaching to understand their otherness. In real life we have our parents to fulfil these roles. But it’s usually the case in fiction that these characters that give guidance don’t have the familial attachment of ‘parent’. They are the tertiary adults, who fulfil the role of parent without the prejudice and judgement that entails.

Perhaps it’s just that writers have bad relationships with their parents, but rarely – if ever – does the most important guidance required to see these characters through to the end of the narrative come from parents. It might be because the characters are orphans, or the parents are absent – both of these tropes are mainstays of the genre. Fiction for children lends itself well to wise older characters, because children’s fiction is filled with outsiders needing guidance, yet it seems that when parents are present, children don’t go on adventures.

Who does this leave? Teachers. Old women. Grandparents. Distant relatives. In many cultures, they all fall under the same word. It may have fallen out of fashion now, but that categorisation applies in English too – in short, we’re talking about aunts and uncles, informal or otherwise.

What better word is there for the adults that assume the role of parent in the absence of parent? There are honorary aunts and uncles abound in the real world. Why not in imagined worlds?

The word ‘aunt’ or ‘uncle’ does not denote responsibility per se, but it does open the possibility of care. An aunt or an uncle is usually a temporary presence, but with opinions and power the same as any parent. In real life, as in fiction, an orphaned child might find themselves with an aunt or uncle.

The concept of gay aunts and uncles is not a particular new or interesting idea. It is a prevailing theory as to why homosexuality hasn’t been bred out of any population. In fiction, their presence mirrors the real world. If queer people exist to support the lives of children, then more than a few of the children supported in fiction get a little help from their queer aunts and uncles.

The absence of relationships is as questionable as the presence of them, because for a long time, representation of any queer characters – happy ones, anyway – was illegal.

The absence of relationships isn’t the only evidence, of possible queerness. The circumstantial evidence is as varied as it is flimsy, but it’s no less flimsy than a knowing glance between two Valkyries in 2017’s Thor Ragnarok. Queer people have been forced to see representation where there’s questionable evidence and word of God for decades. Who would have known that Mrs. Danvers was apparently a lesbian without this handy Wikipedia article?

Fiction is filled with flamboyant bachelor uncles, and interesting albeit reserved bachelorette aunts. Flamboyance and extravagance are stereotypes now, but in previous years they could be seen as cultural markers. Dumbledore was extravagant and weird. What is flamboyant if not a bird that catches fire? Diana Wynne Jones’ Chrestomanci and Howl, though both textually heterosexual, were both flamboyant and extravagant in an era when the term metrosexual was uninvented. In the Nevermoor series from Jessica Townsend, we have the extravagant flouter of rules, Jupiter North. These are, of course, male stereotypes. The female stereotypes are little murkier.

The maiden aunt trope is one based in reality, and one that is replicated in many children’s narratives. When healthcare for women started becoming a Thing, so was Incredibly Deadly War, leaving many women widowed or without husband. How many of these women were happy to do without we will never know, but their presence has endured in fiction, even outside of the realm of children’s fiction. The Austen novels are nothing without their maiden aunts.

Of course, many of these women – in real life at least – lead unpartnered lives as wholesome heterosexuals. But there are innumerable queer women who would have found this arrangement invigorating, either because they preferred the same sex or preferred no partnership whatsoever. The maiden aunt could be seen as a miserable character, or they could just as easily be fulfilled and happy without a man.

Outsiders in their own worlds, they provide an anchor for ‘others’. These flamboyant uncles or interesting aunts provide a glimpse into the future for characters that are otherwise incapable of imagining a future as an ‘other’.

In real life, the adults we see as children are the adults we believe we can become. The most normal of which are usually our parents, and possibly our grandparents. If our families are large, we might see a deviation from the parental norm through our extended relatives – our aunts and uncle, our cousins and niblings, adults that don’t need to exist in a nuclear family unit to be happy and healthy adults.

When J. K. Rowling revealed that Dumbledore was gay in 2007, there was a short silence and then burst of applause at Carnegie Hall. Applause for representation? Or an acknowledgement of something that has always been there?

Mark is a writer and comedian. He is a host on Radio Adelaide’s Pride and Prejudice and The Range. He also hosts The Piecast.

One thought on “Our Giddy Aunts: Queer Readings of Mentors in Children’s Fantasy Fiction”